Veteran journalist Lisa Wilkinson was warned by the prosecutor that her Logie speech could delay Brittany Higgins’ rape case, The Australian ($) reports — but he reportedly wouldn’t listen to it when Wilkinson started to read it to him beforehand, saying “we are not speech editors”. The judge has agreed “regrettably and with gritted teeth” to delay the case because of all the coverage of Wilkinson’s words, news.com.au continues. Accused Bruce Lehrmann’s lawyers said the speech was a “contempt of court” — indeed the fact Wilkinson is a witness in the trial does complicate things somewhat.

Out west and WA mining is bracing for a report that is expected to show damning failings over the industry’s handling of sexual harassment, sexual assault, and bullying, The West ($) reports. An inquiry heard of 164 incidents since 2015, and found that only 13 notices had been handed out to companies. It’ll be tabled on Thursday, and to get ahead of the headlines the regulator has hired PwC workplace culture expert Elizabeth Shaw to head up a review. Speaking of parliamentary inquiries — Labor has vowed to block former NSW deputy premier John Barilaro’s plum posting as US trade commissioner until an inquiry into the appointment is complete, the SMH reports. The position pays nearly half a million bucks a year and an urgent upper house inquiry was launched. The job appointment didn’t go through cabinet.

Queensland will tax big business — including Coles and Woolies — to the tune of $1.4 billion to fund mental health, The Brisbane Times reports. It’s one of several items in the Sunshine State’s budget handed down yesterday and comes after a parlimentary inquiry found Queensland had the lowest national spend per person on mental health in 2019-20. It’ll be in the form of a payroll tax levy — The Courier-Mail ($) called it a broken election promise from Labor, but it’ll only affect the top 1% of all businesses. All Queensland households will get a $14.60 discount on their electricity bills each month too — but they’re expected to rise by that much in July.

Invest in the journalism that made a difference.

Rents are also soaring at the moment, and not only in Queensland — in the last year, Perth rent went up 12.5%, Devonport (Tassie) increased 15.6%, Lake Macquarie (NSW) went up 15.6%, while Nerang (south-east Queensland) went up 21.5%, according to new research InvestorKit — check it out here. Surprisingly, Queensland’s budget showed a $1.9 billion surplus for 2021-22, The New Daily reports, even though the Queensland government predicted a $1.49 billion deficit just six months ago. Why? Surging coal royalties ($7.29 billion!) and land transfer duties mostly.

NSW’s budget, which also dropped yesterday, decidedly did not show a similar surplus last year — with a deficit of $11.3 billion, the SMH says. Next financial year it’ll be a whopping $16 billion in deficit, but Treasurer Matt Kean called the contents a “once in a generation” economic reform, The Australian ($) reports — with parents, women, and first-home owners the biggest winners. We learned yesterday that families will get $150 to help pay for supplies for schoolchildren, in addition to already-announced things like a $750 toll rebate for drivers and a $3000 bonus for healthcare workers.

Also in the budget — NSW first-home buyers can opt to pay annual land tax instead of stamp duty, the AFR reports. Stamp duty (a tax charged by state governments on property purchases, as Guardian Australia helpfully explains) is a hefty upfront cost — last year Sydneysiders paid $49,934 on an average house. NSW is also offering a shared equity scheme — where the NSW Coalition government will cop up to a third of the cost of a house. Sounds familiar?  PM Anthony Albanese took a very similar policy to the election, which Scott Morrison slammed as Labor “making money off you”, as Guardian Australia reported. This was despite Morrison supporting other, nearly identical state-based schemes like in WA and SA, as Sky News Australia reported.

La Niña is over! The rainy mistress causing wet summers and gutwrenching flooding has passed — for now, ABC reports. We’ll still see above-average rainfall in the next few months, and the warmer-than-normal ocean near Australia isn’t helping, the Bureau of Meteorology (BOM) says — indeed there’s a 50% chance La Niña will be back. A triple La Niña hasn’t been seen since 2001. Last November was actually the wettest November in 122 years — yikes. So what actually is La Niña? Well, the Earth has these trade winds that blow east to west both above and below the equator. Basically, a La Niña event turbocharges them, pushing loads of warm water towards Asia — and as we all know warm air rises, it makes more rain-heavy clouds for us and our rainfall increases, as the BOM explains.

If you love to ski or snowboard, La Niña can be a very good thing — it’s just started snowing in Perisher and Thredbo, and Victoria has already seen a decent dump, news.com.au says. But for everyone else, it’s bloody freezing. And — you guessed it — climate change is contributing to La Niña’s frequency, The New Daily reports. It comes as a conservation group is desperately seeking an injunction to stop a Woodside gas project that’s about 3000km from the Great Barrier Reef, ABC reports. The Australian Conservation Foundation says the Scarborough (WA) project is a “really, really big carbon bomb”, the equivalent of turning on 15 coal-fired power stations, and could hasten climate change. Woodside was defensive, saying the project would deliver jobs, tax and gas.

ON A LIGHTER NOTE

Adam Farrer watched his mother on stage, and shined with pride. She was auditioning on Britain’s Got Talent, twirling her nipple tassels in opposite directions to a roaring crowd. But, Farrer admits, his butt did clench involuntarily — it’s his mum, after all, performing burlesque on TV, and even though Farrer was used to seeing her perform, 10 million others were watching her too. His mother has always had that razzle-dazzle, Farrer rather beautifully writes for The Guardian — “She brings something special to any room she enters, as if every light is straining to illuminate her,” he says. He tried to emulate her cadence and mannerisms as a teen, he says — but “teenage boys, I learned, do not like or understand flamboyantly told stories about middle-aged sex and childbirth-related hemorrhoids”.

Young Farrer was crushed and quickly zipped up his shining admiration for his showbiz mum — but it all came flooding back seeing her on the big screen with her tassels spinning joyfully, he says. “Here was my mother, taking the risks I had sworn not to take, being bold and fearless, forcing me to see my reflection in her,” Farrer writes. So he took the plunge and signed up for a spoken word event. His mum was thrilled, but when he stepped out in front of a crowd of a dozen, he felt sick to his stomach. He thought of his mum, and delivered his story to a great reception. He’s not saying he’s exactly like her, but he likes to think he can borrow a little razzle-dazzle from his mum when he needs to. Sometimes we could all do with a little of that nipple tassel confidence.

Wishing you a little courage to take on the scary stuff today, folks.

This is all the more offensive to frontline workers when you consider that Mr Barilaro’s expenses budget of over $100,000 is more than a nurse will earn in a year, not to mention the $450,000 a year salary. I can think of 100 better ways to spend this money.

The NSW Labor leader has slammed the decision to appoint former NSW Nationals leader John Barilaro to a plum New York trade posting that pays nearly half a million bucks a year. 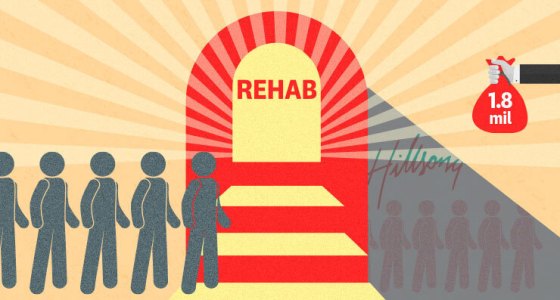 “The federal government is locked into a three-year, million-dollar-plus funding deal with a rehabilitation facility described by a former resident as ‘a Hillsong indoctrination centre’, a Crikey investigation has found.

“The deal, approved by the Morrison government in 2019, sees the rehab facility, known as one80TC, paying funds to Teen Challenge NSW, a charity whose office holders include the powerful Hillsong ‘elder’ Andrew Denton (not to be confused with TV producer and assisted dying campaigner Andrew Denton).” 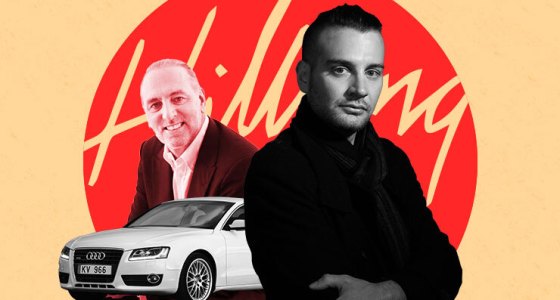 “Washing Brian Houston’s Audi was not the kind of therapy Jacob Harrison had in mind when he entered the Pentecostal-linked rehab facility one80TC to treat his alcohol addiction, but that’s what he found himself doing — an unpaid volunteer worker at Hillsong’s annual conference.

“Glitzy up front, with the great global pastor Houston on stage, the conference was packed to the rafters at Sydney Olympic Park. But it came with its share of grungy behind-the-scenes jobs.”

READ ALL ABOUT IT

Lowe’s message: take a blow on the chin for the economy — Ticky Fullerton (The Australian) ($): “Reserve Bank Governor Philip Lowe does not see Australia in recession but he admits it is a narrow path to steer the economy back to an inflation rate within the target 2 to 3% band. If he is to succeed however, most Australians will need to accept something very important. Part of the pain will be worn by them in real wages cuts. If the ‘inflation mindset’ of the public and the market changes — if there is an expectation that inflation might shift to levels of 4 of 5% and stay there — then there is no happy ending for the economy.

On Wednesday evening Dr Lowe heads to Switzerland for a meeting of world central bank governors looking for collective wisdom on how to handle the global crisis. On Tuesday in a speech at the American Chamber of Commerce, the governor reconfirmed the RBA’s forecast of peak inflation at 7% in the December quarter. The cost of living is going up. But the bank is relying on an entitled Australian public understanding that it has been mollycoddled for the last two years and it now has to cop some of the pain.”

Living with universal childcare has shown me Australia’s system is neither a luxury nor a right — it’s a last resort — Gabrielle Innes (Guardian Australia): “I had reservations about sending my two-year-old daughter to childcare (‘kita’ for kindertagesstätte in German) in Berlin — cultural differences being the main sticking point, but also trusting other people with her care, COVID, generalised ‘mum’ guilt. Nevertheless, since the start of the year, she goes there, Monday to Friday from 9am to 3pm. And it’s free, except for the €50 (A$75) we pay every month that covers food and occasional extras like an ice-cream on a hot day. In a nursery group of seven, along with two carers, they go to playgrounds, gymnastics, theatre performances and community gardens. Lunch is catered every day, and when it’s delivered, I’m told my daughter yells, ‘Essen!’ (Food!), and runs to the door in her little felt hausschuhe (slippers).

“While I don’t connect with my daughter’s carers, and there are things that I might do differently myself, I do trust them with her care — and I can see that my daughter feels bonded with them in community, even if I don’t. If we were to return to Australia, as I hope that we one day do, the money I earn working part-time as a freelancer would not make this level of care financially viable. And so, despite my initial hesitations, perpetuated perhaps by how insular life has been the last two years, I realise now how incredibly lucky we are in Berlin to have universal childcare available to us. Not only am I able to work without the financial burden of childcare hanging over me, I am also able to take time out for myself if I need it.”

Save this EOFY while you make a difference

Australia has spoken. We want more from the people in power and deserve a media that keeps them on their toes. And thank you, because it’s been made abundantly clear that at Crikey we’re on the right track.

We’ve pushed our journalism as far as we could go. And that’s only been possible with reader support. Thank you. And if you haven’t yet subscribed, this is your time to join tens of thousands of Crikey members to take the plunge.

The red dust pilgrimage to Birdsville